(This picture reminded me of Shirayuki, she liked to look for herbs in the forsest)

All I want is to watch an anime without fighting in it and that is hard. I didn’t realize how hard it is to find a show I haven’t already watched or one I didn’t care to watch. I don’t want to give up on my hunt…

I almost passed up watching a good show, because I thought it was going to be like a different take on a Disney show. The anime I am talking about is, “Snow White with the Red Hair.” I really liked this anime…. 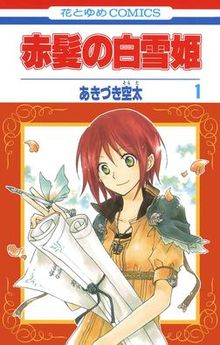 Image may be subjected to  copyright

Snow White with the Red Hair is a Japanese shōjo manga written by Sorata Akizuki. It was serialized in Hakusensha’s bi-monthly shōjo manga magazine, LaLa DX but has since moved to monthly LaLa and is published in collected volumes by Hakusensha. Wikipedia

I very much enjoyed this anime and even though it seemed like it ended on a good note, I couldn’t helped, but wanted to know more about the story. I was watching this on Hulu. I thought that was the end of the story, until I found out there isn’t going to be a third season.

I just had a thought, “is season three in a book?” I did ask Google and something came up, but my computer said the word virus so I clicked off that site and I am moving past this story.

I believe it will have a good ending. I may just go back to one of my favorite shows for now as I work on a scarf for my little one. I cannot believe how cold it has gotten here in North Carolina. It was in the 70’s last week. The sun is out, too bad it’s warmth isn’t with it.

I don’t want to give up on finding another anime. It can have some fighting, but nothing over the top. I am going back to my search and hope for the best.

Okay, I know there is an anime out there, but for now I am done looking for it. I decided to finish watching the anime “K,” and get back to my crocheting. I just can’t let all this light go to waste.

The K: Return of Kings manga is an adaptation of the anime television series of the same name, written by Hideyuki Furuhashi and illustrated by Haruto Shiota. It began serialization in the G Gantasy magazine on October 17, 2015.

I don’t remember why I stopped watching this show, so I am going back to it to get my answer.