I am in the middle of Georgia, and it is more than just Atlanta. I cannot get this thought out of my mind, and I thought of making another list to finally set this thought free…

To So – So Parents

Let me just say, he or she would never do it again. Yes, kids will test you, but you let them know at an early age you are the ones in control and not the other way around.

I believe I can stop here and move on to something more pleasant. Well, I am working on a baby blue crochet project now. I think I will prepare dinner and get back to that….

A nice way to end my Saturday…

We all can talk and some even may understand the words that are coming out of our mouth. But what if you are saying one thing and your meaning is totally different from what you are saying?

I thought I was being nice and letting go and ending a friendship clear and to the point? I was wrong, because they kept reaching out. Phone calls and text messages have gone unanswered. You know you are right, but it still bugs you that there seems no end to this…

You reached out to friends (female friends don’t answer) and one brave person (yes a male friend) who told me my words weren’t strong enough. He heard my anger, and pointed out it wasn’t towards the right person, and I agree.

I have decided I am “NO LONGER GOING TO PUT MY FEELINGS ASIDE TO TALK WITH ANYONE”. As a person no one wants to be alone and if there is a light coming from somewhere even if that light is grey we move towards it.

I LOVE looking up, because just like the clouds I am always changing. There’s beauty in everything and I REALLY DO NOT need someone to tell me I am beautiful or to talk to. I Know I am Loved. I have a few people who I can honestly call my friend (even if we don’t talk every day) and family.

I am Blessed and it’s time I act like it. I am listening to a song by Jonathan McReynolds & Mali called “Movin’ On,” and I believe everyone should not only listen to these words, but understand them. One has to move on to be free  and Happy. We can either learn and move on or we can stay where we are and die like everyone else. I am not like anyone else I am More than what they see. So, Who Are You? 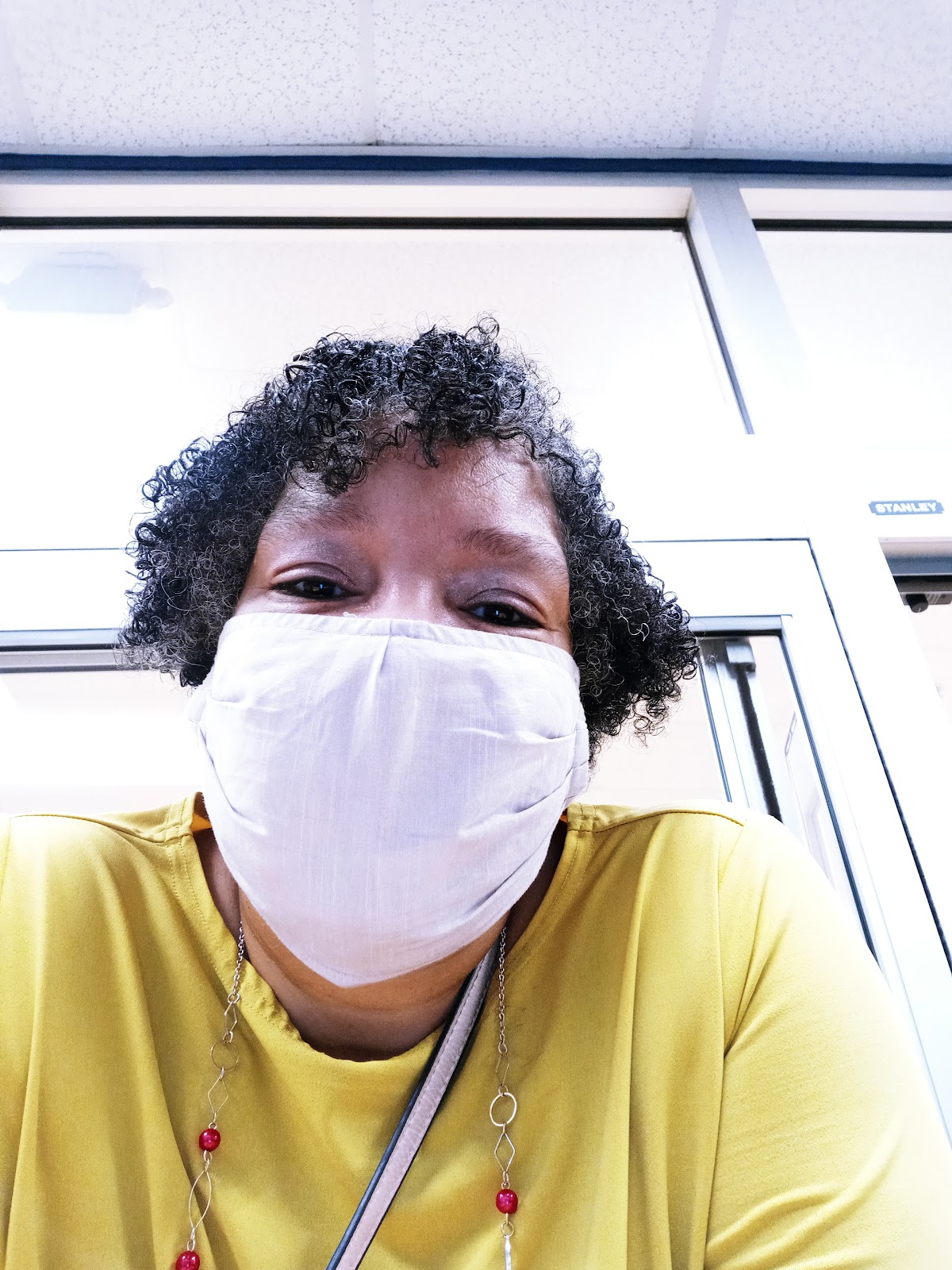 I surprised myself by adding some color to my eyes, but 30 minutes after I clocked in I can’t tell. Oh well I added it for myself and not to express anyone.

I was so happy when I saw a lady and her grandson both wearing masks.  Kids breathe in the same air as we do. If an adult and teenagers have to wear a mask so they won’t get sick, so should a child.

It is unreal the amount of people who don’t wear them in public? They don’t believe they will get it or they just don’t care? Then it’s the ones who wear it under their noise and that’s not right.

I wear a mask to protect myself, my family, friends, and anyone around me. Wearing a mask shows I care. I wish others would feel the same…

An Extra Thought:  I was going to close yesterday morning, but I couldn’t shake the extra words that were forming in my head.  I wanted to add more info to my “Thinking Out Loud,” and my phone wasn’t letting me do that. I put it aside and waited until I could set my thoughts free. I decided to go to another step with the help of Google.

How to wear a mask correctly?

• Wash your hands before putting on your mask

• Try to fit it snugly against the sides of your face

• Make sure you can breathe easily

I could go on, (because there are countless more info on this subject) but I am going to stop here. It is now a little after 7:30am, and I am going out for a walk before it starts raining. I also like to eat, so I will be walking close to my home, and not too far out.

I am surprising myself once again, because there was a time when I would either wait until the sky lightens up more and a little warmer. I do have a jacket, and I am not going to be walking out of my area. I am Not going out in fear, but out to be a better me…

The day started off with a plan…

The plan was to get in some writing,

Enjoy a game or two….

other then my writing

I am still able to Smile, because

I was able to cut a lot of words

from my overworked book,

and playing games is always fun….

I did enjoyed a healthy salad

I am still working on

I know I have been putting off working on my writing, because I was hoping to be typing on my new computer. I was so happy when my new computer arrived and it was going to be upgraded and returned the next day.

That day has passed beyond a week and my cousin  (whom I had trusted before a few years ago. I paid him then as I did a month ago, and I am still without a computer.

Not answering his phone and I have lost count on the text and messages I sent him. I am about to call his mom and see if she heard from him, because my patience is running low.

There was a time I would have let this go and cross that person out of my life. Then they become passing friends and I am okay with that. Now that I am thinking about passing friends, I just remembered James.

He kept on acting as if he had a job and not slowing down. He would not take my advice, but when the government had your job closed. Okay, that should have opened your eyes and stritch out some of your savings, and when it became over three months it was time to start rethinking.

When his town started slowly reopening, I suggested he look for a temporary job, but he said “no.” His phone got cut off and I knew he was calling from his parents phone. I wasn’t calling him there and he didn’t understand why?

He forgot he once told me how his mother was so upset, because she wasn’t an operator. So out of respect for her, I haven’t called him, and since he lives out of state. We can’t even be passing friends and I am so grateful.

I wonder why people seem to take a nice and somewhat quiet person for granted? It’s an old saying, “it’s the quiet ones you have to look out for, because they’re like cats.”  If you know anything about cats, then you will know they are sneaky animals, and you never know what they are going to do.

I guess that’s why I love cats. Some may think they don’t do anything, but if you like them. They will like you and always there to keep you company. They will play, but they don’t need your total attention all the time as a dog would. I am not going to go farther than that, because I REALLY do not like dogs.

I can’t believe I wrote five stories in two days while I was at work and could have written more, but my manager had a problem with me doing two things. Oh well, I am about to get to correcting my hand written words, and get back to my new crochet project.